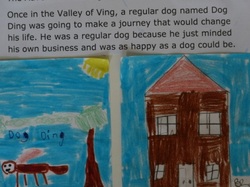 Once in the Valley of Ving, a regular dog named Dog Ding was going to make a journey that would change his life. He was a regular dog because he just minded his own business and was as happy as a dog could be. 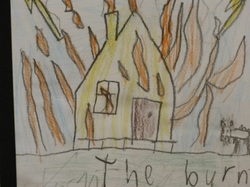 It all began when Dog Ding was separated from his owners in a terrible storm. The lightening came and struck their house. The house caught fire. Dog Ding escaped but his owners didn’t. Dog Ding left his home in sadness. He wondered where he would live. 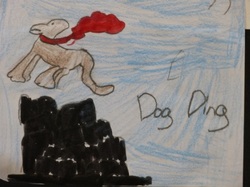 Soon Dog Ding found a small cave to shelter in for the night. The night passed and morning came and Dog Ding woke up. He left the cave to find water and food. A few minutes later, Dog Ding found a pond with a dead cow lying next to it. Nearby, was a red blanket. He put it on to keep warm. It looked like a cape and made him feel brave like a super hero. 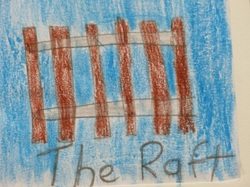 He ate the meat from the cow in disbelief that he was still alive. Dog Ding left the pond and continued his journey. The next day, Dog Ding discovered a lake with a wooden raft on the bank. Dog Ding leapt onto the raft. For a whole day, the raft floated down the lake. At last, the raft came to the bank. 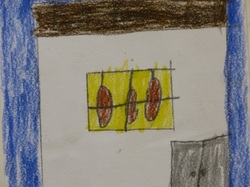 Dog Ding found a female dog called Lily. They became friends and lived in a village near the Valley of Ving. Dog Ding met a kind, old lady who became their new owner. She had a butcher shop. Dog Ding and Lily guarded the shop for her. In return, the owner would give them some sausages. 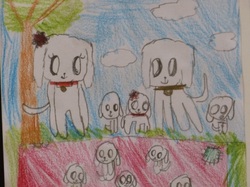 Dog Ding and Lily lived together for the rest of their lives. They had puppies which grew up to be just like Dog Ding. The puppies kept the red blanket to remember their father and they had their own adventures.